In 1922, when Charles Levy and Nathan Berler invested approximately $70,000 to build the double house at 809-811 Riverside Drive, could they have foreseen that in less than a century, both houses would be landmarks in the Audubon Park Historic District and the house Berler occupied would be on the market for well over a million dollars?

Levy lived at 811 until after 1930 and the irregularly shaped lot lying on a steep slope where 158th Street meets Riverside Drive was registered in his name, but Berler’s name appeared prominently in all press coverage during construction and is now associated with both houses as well as the apartment building he built several years later at the adjoining 807 Riverside Drive. 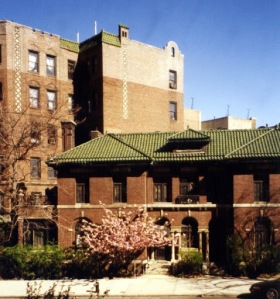 Berler and Levy conceived the double house as an antidote for horizontal apartment living, a pendulum swing back towards the row house, but the experiment – no doubt a source of great irritation to residents across the Drive on the lower floors of the Grinnell, who lost their river views – ended with this one example. New Yorkers, particularly female New Yorkers, were not enthused about returning to vertical living, even if this new model did solve some of the light and ventilation problems associated with row houses – including a solarium attached to the living room – and did relocate the kitchen from the basement to the rear of the first floor, convenient, properly ventilated, and adjacent to the dining room. The houses revisited a negative feature of row houses; with living zones on separate floors, inhabitants had no choice but to traverse multiple staircases to accomplish life’s daily rituals and functions.

On the other hand, with early 20th Century conveniences and appliances, despite the multiple staircases, Mrs. Berler sufficed with one permanent servant – German-born Tony Lang, and Mrs. Levy had no live-in help. As the floor plan and pictures of the interior reveal, the main staircase was not a steep ladder, the reviled hallmark of the middle-class row house, nor were the rooms dark and narrow. Berler’s living room was sufficiently large to accommodate a Welte organ, called an organ, but probably an orchestrion, the organ equivalent of a player piano, featuring organ pipes as well as percussion effects, and sometimes even a piano.

In the 1930 Federal Census, Berler declared his house worth $40,000 and Levy priced his at $50,000. Shortly afterwards, both men relocated, leasing their respective houses for several years before selling them. Like other buildings in the Audubon Park area, the Berler houses endured the real estate shifts after World War II and steady decline from the late ‘60s to early ‘90s, but shielded from the negative effects of rent stabilization – an imbalance between what a landlord could collect and the increasing need for repairs and upgrades to aging buildings – the owner-occupied houses survived in better condition than the neighboring apartment buildings.

Chance visitors to the corner of 158th Street and Riverside Drive rarely fail to pause – often in visible wonder – when they discover the Berler Houses. That fascination has only increased now that Nathan Berler’s house bears a large For Sale sign.