Glacier National Park in northwestern Montana, “where the American and Canadian Rockies shake hands,” is well over two thousand miles from the Manhattan apartment house sitting at 800 Riverside Drive; Mapquest calculates the distance between the two locations as 2,374.56 miles, a drive of thirty-seven hours and forty-two minutes, assuming you can travel tag team and don’t stop for food, fuel, or restroom breaks. What could a million acres of parkland encompassing ecosystems ranging from prairie to tundra – including two dozen active glaciers – have in common with a nine-story apartment building sitting on a triangular plot in northern Manhattan? Well, for one thing, both are celebrating centennials this year. But the cross-continent bond goes much deeper than that. Glacier National Park and the apartment building at 800 Riverside Drive share a common heritage, traced back to one man: George Bird Grinnell.

On May 11, 1910, twenty-five years after Grinnell hired James Willard Schultz, an explorer and author, to guide him on a hunting expedition into north-western Montana, and nineteen years after he conceived the idea of conserving the area as a National Park, President William Howard Taft signed a bill into law designating Glacier National Park as the tenth National Park in the United States. One month later, on June 10, 1910, construction began on The Grinnell, a nine-story apartment building sitting on a triangular plot numbered 800 Riverside Drive, a plot where the Grinnell family had once grazed a few cows when the surrounding area was rural and bore the evocative name Audubon Park.

For more than two decades, using his magazine Forest and Stream as a bully pulpit, George Bird Grinnell (left) lobbied for the protection of the area that became Glacier National Park, along the way dubbing it the “Crown of the Continent,” (in Century Magazine, September 1901) a sobriquet still in use more than a century later. Grinnell moved in a circle of wealthy and influential people and was familiar with the workings of politics: his grandfather had been a US Congressman representing Massachusetts for a decade in the early 19th Century, his father’s business partner and close friend Levi P. Morton had served both as New York’s governor and US Vice President, his uncles James and William both held government positions, and he himself was a close friend of Teddy Roosevelt – so he understood that the success of his project depended upon backers with deep pockets and strong influence. The key to Grinnell’s success seems to have been his willingness to combine his conservation efforts with the Great Northern Railway’s desire to develop and market the park’s potential for tourism. Working with the politician Henry L. Stimson and the management of the Great Northern Railway, Grinnell eventually gained Congressional support for the park, designated first as a forest reserve in 1897 and then re-designated a national park a dozen years later. Commemorating Grinnell’s tireless efforts, Glacier National Park contains Grinnell Mountain, Grinnell Glacier, and Grinnell Lake. 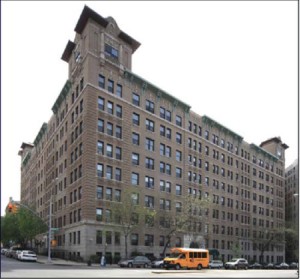 The spring of 1910 must have been an emotional roller coaster for George Bird Grinnell, then past his sixtieth birthday. In Montana, his dream of a Glacier National Park had come to fruition a quarter of a century after he had first seen its splendor, but back in New York City, his beloved home of more than half a century, Audubon Park, was disappearing beneath a cityscape of apartment buildings and an adjacent museum complex. Ironically, efficient rail transportation and construction of multi-unit dwellings had contributed to both transitions.

In 1891, the Great Northern Railway crossed the Continental Divide in the vicinity of the future park and began promoting the region as a tourist destination. After President Taft designated the area a National Park, the Great Northern built hotels and chalets to entice and lodge visitors – multi-unit dwellings for short-term guests. Similarly, when the New York subway began running in 1904, with its 157th Street station at Audubon Park’s back door, it shortened the trip “down town” to less than half an hour, thus stimulating an unprecedented apartment house boom along its route – multi-unit dwellings for long-term “guests” – drawing hundreds of Manhattanites up town, and sealing Audubon Park’s fate. Efficient transportation and ample housing: a recipe for change.

For the rest of his life, Grinnell remained nostalgic for his Audubon Park home, writing about it at great length and in great detail, creating a sense of place that occasionally flirts with fiction and fancy, yet always evokes the Arcadia that had been “the Park.” Despite his nostalgia, Grinnell took a stoic attitude about his lost home, writing to a friend, “Even old people have to suffer these things [changed conditions of life] from time to time; I was pulled up by the roots from Audubon Park and transplanted at East 15th Street. The change would have been misery if I had permitted myself to think about and lament it. I did not think about it, and did not regret.”

Yearlong birthday festivities began at Glacier National Park on May 11th and will begin at The Grinnell on June 10th – how often do we celebrate a centennial? Both in Montana and in New York, the celebrations will include a party, birthday cake, special exhibitions, and – the ubiquitous medium of the 21st Century – a website. Hovering quietly over the festivities on both sides of the continent, binding these two seemingly disparate events, will be the spirit of “the Father of Conservation,” George Bird Grinnell.