If you’ve ever walked up 158th Street from the western end and tried to puzzle out the faded apartment advertisement stretching six stories to the sky on the back of 853 Riverside Drive, buy this year’s Riverside Oval Association calendar and flip to January. There, in a photograph dated January 26, 1931, you’ll find the text, readable even without the help of magnification. The sign, which must have been painted on the building when it was new, advertises units at the “Riverside Apartments,” ranging from three to seven rooms and guarantees the “most for your money in the City of New York.”

The 2014 Riverside Oval Association (ROA) calendar is now available and like many of its predecessors, offers historical views in and around the Audubon Park Historic District holding a wealth of detail about life in the neighborhood in the first decades of the 20th century. After you admire the street scenes for their overall richness, get out a magnifying glass – or scan the photos at high resolution and “blow them up” on your computer – and examine the details, particularly those small items half hidden at the edges of the images. 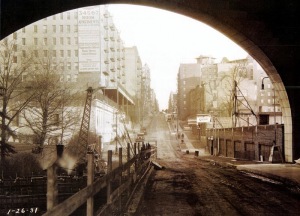 Start with another look at January. In the foreground, street work is underway, probably the reason for this photograph at the New York City Municipal Archives. What was initially a utilitarian photograph to document work became our window into the past. The garages on both sides of the street sell Socony Gas – Standard Oil Company of New York, one of the thirty-plus companies formed after the breakup of Standard Oil in 1911 – and feature the Pegasus logo that continued when the company became Mobil. A bench sitting under the leafless trees on the left seems out of place in this cityscape. 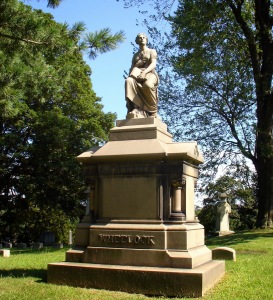 That’s the front yard of the house William Almy Wheelock built during the Civil War. He had been living in a house in Audubon Park on the southern side of 158thStreet and even bought it, but then after a few years bought land from the Knapp family and moved across the street. A 1926 view of the house appears as the calendar’s July photograph. In that image, the overgrown gardens and vine-laden piazza are a shadow of the Wheelock mansion’s elegant past. (Find the dog for extra points.)

Wheelock, a native of Providence, RI, enjoyed success in New York as a merchant and then as president of the Central National Bank. He was an elder of the Washington Heights Presbyterian Church, where he donated an organ so grand, he had to donate additional money to extend the front of the church to accommodate it. For many years, he served as a director of The New York Institution for the Instruction of the Deaf and Dumb Institute, about a quarter of a mile north of Audubon Park. A picture of the institute’s second building is on the cover of the 2014 ROA Calendar.
Who’s the man standing in front of 807 Riverside Drive in the March photograph? Could it be Nathan Berler? After collaborating with Charles Levy on building the double-house at the corner of 158th and Riverside Drive – Berler’s half is visible in this picture – he built 807 Riverside, described in the New York Times as costing about $400,000. Among its perks were “radio aerial service” (are those antennae on the roof?) and a “private ballroom for tenants,” with a separate entrance at the rear of the building. The building opened in December 1924 and the Berlers inaugurated the ballroom in May 1925 with a dinner, chamber music, and dancing. 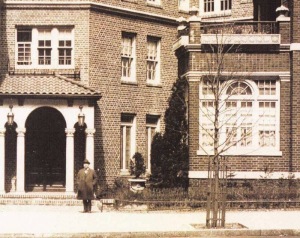 Detail from “March” (Museum of the City of New York)

By 1929, the Audubon house, hidden below the viaduct at the corner of 155thStreet was in its last days and declining rapidly, though still a favorite topic for photographers and, as the April picture illustrates, artists. This image, by Josephine Barry, who specialized in drawing historic buildings, romanticizes the house and depicts is in better health than contemporary photographs do – though the naked trees do give it a slightly spooky look. Mrs. Barry faithfully captured the bay windows and mansard roof that Jesse Benedict added in the early 1870s, but why is that ladder on the roof?

Photographs of the intersection of Riverside Drive, 158th and Edward M. Morgan Place (February), Audubon Hall Apartments (August), and a corner of the Robert Fulton (October) are reminders of how elegant awnings can look on a façade. Staff members in apartment buildings must have hated putting them up every spring and taking them down every fall, but they were as practical as they were attractive, shading the apartments and keeping them cool in the mid-day sun. The intersection in the February photograph looks bare, without the many trees that now stand between the upper and lower parts of Riverside Drive and the median with the stoplight that breaks the east-west crossing. Flip to the back of the calendar to see a then-and-now comparison. 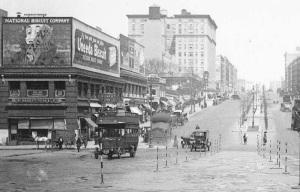 September and the bonus photograph for January 2015 illustrate how different Broadway north of 157th looked once the Church of the Intercession moved from 158th Street to 155th. Even with the top of its tower missing in 1910, the Church dominated the west side of Broadway. By 1920, the focus has shifted to the Letchworth and Hampstead apartment houses built in 1912. In the photograph of a very busy time of day, the sign marking the Rio Theatre is clearly visible just south of the Letchworth. That’s where housekeeper Catherine Phelan claimed she had been when her employer was murdered with a tack hammer while in his shower at the Grinnell. Phelan’s story fell apart when she couldn’t name the movie, the actors, or tell the police anything about the plot – the spot of blood on her stocking didn’t help her alibi much either. The movie she hadn’t attended was – appropriately – May West’s “I’m no Angel.”

The Riverside Oval Association has a dual goal of improving the greenery in the Audubon Park Historic District while fostering a “sense of local spirit.” Throughout the year, local resident Christina Read organizes gardeners to tend the oval park that sits at the bottom of 156th Street, in the middle of Riverside Drive. The ROA also sponsors a yearly birthday party honoring John James Audubon (this year’s will be Saturday, April 26, 2014) and such events as the art fair on Edward M. Morgan Place last June that featured more than 20 artists. When you buy a copy of the ROA Calendar, you support these activities, so buy one for yourself and several more to give as gifts this holiday season.